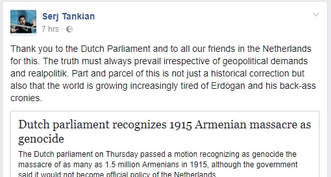 The prominent Armenian-American singer-songwriter Serj Tankian made a post on Facebook on February 23, 2018, saying «Thank you to the Dutch Parliament and to all our friends in the Netherlands for this».

«The truth must always prevail irrespective of geopolitical demands and realpolitik. Part and parcel of this is not just a historical correction but also that the world is growing increasingly tired of Erdogan and his back-ass cronies», SOAD lead-vocalist added.
​
The post sparked a long row of comments and got hundreds of shares. Some of the commenters were backing Tankian in his expression of gratitude to the Netherlands, the others said that the move was belated. There are also some comments from Turks denying the Armenian Genocide.
​
The Dutch parliament on February 22, 2018, passed a motion recognizing as genocide the massacre of 1.5 million Armenians in 1915, although the government said it would not become official policy of the Netherlands. The motion was opposed by just three lawmakers out of 150.